Producing our own electricity

Since 27 January 2012, we are producing our own electricity using a photovoltaic (PV) system on the roof. This is the story that goes with it.

Here are two pictures before the change. Note the little ventilation outlet at the left of the front roof (which was moved to the back), the birch tree which is a little too high, and the winter shadowing on the side roof which determined the configuration of the panels there. 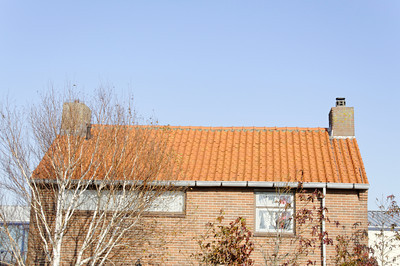 The front roof is pointing south-by-southwest, this should give 98% of the optimal power in The Netherlands. The side roof is slightly less efficient (88%), but picks up the sun in the early summer morning (there are many web sites where one can calculate these efficiencies).

Here is the situation just before sunset on 27 January: 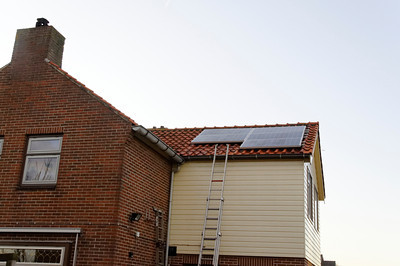 The front has 18 Senersun panels (150x80 cm, 190 Wp each), configured as 2 strings of 9 connected to one channel of the inverter. The side roof has 5 panels connected to the second channel. Total power is 23x190 = 4370 Wp. At our location and with this configuration, this was predicted to produce 3950 kWh/year; approximately our own "regular" consumption according to our electricity company. After approximately ten months we can say that the production is far above the expectation, and that our electricity use is significantly below this "regular" number, so we are a net producer of electricity.

In house, the inverter is mounted on the attic, connected to a 240V / 25A fuse in the mains cabinet (switched off on the picture at the right):

The display on the inverter shows the total power produced, the power produced today, and the current power. It also alternately shows the determined optimal V/A setting for the two channels.

We don't need to go to the attic to check on the status! A small solar-powered monitoring unit in the living room gives us a heads-up on the system.

The first picture is 5 minutes after power up on the day of the installation, the second picture is during the first full day, and the third picture is the result after one (winter) day of our own power: 6.7 kWh. This unit can also be connected to the computer via USB. This makes it possible to get historic readouts per 10 minutes. This results in our statistics pages, which compare the actual production with model calculations.

To give an impression what is needed to install your own solar power in The Netherlands, this is our timeline. It may be nice to place this into contrast with the experience of Scientific American's George Musser .... From decision to execution in 103 days (plus some extra aftermath)